It all began as a group of 11 student of SZABIST sat together to discuss and come up with a topic for their project. Something that they could market. These 11 individuals came up with many issues that could be marketed. Few of them were:

1. Beauty Pakistan Beholds: In which they could have highlighted the tourist spots and destinations that if taken to the next level could have benefited Tourism in Pakistan.
2. Cleanliness and Hygiene: Under this topic this team could have worked towards spreading awareness about the need for hygiene.

Though this team could not pursue one of the topics mentioned above, they had one more idea on which they all agreed in less than a minute. Reason being that this team was very passionate about this cause and they became Team Sustainability.

The idea that they decided to market was of a sustainable lifestyle. Team Sustainability knew that within the time period they had for their project, they will not be able to change anyone’s lifestyle therefore their mission became to spread awareness about the wastage of Water, Paper and Electricity.

These three were the things that their (Team’s) target market could relate to very easily.

For it’s campaigning purposes, the Team began by making a facebook page with informative statuses and pictures put up on it. When it came to on campus marketing, Team Sustainability did not wish to use any more stuff (because it would not be of any use once the project ended) and decided to make use of the banners they had made previously for other projects. doing this they would be able to show that material could be reused as well. 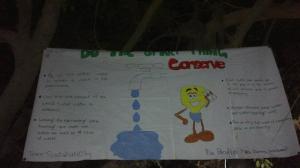 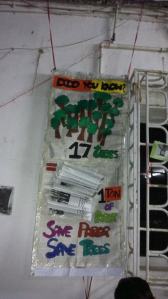 As part of their marketing campaign, a water bottle pyramid was made at SZABIST 100 on March 22nd which happens to be The World Water Day as well. The Water Bottle Pyramid was made to give a visual representation as to what amounts of water an average person wastes everyday. Activities were carried out around the Water Pyramid which revealed facts about water consumption and water supply. One activity was where participants had to toss bottles towards the pyramid and manage to hang the bottles over the pyramid.

The finale to this campaign (on March 26th, 2012) is going to be “Survivor”. Survivor is a game designed by Team Sustainability where participants need to collect all the discoveries that will be placed all across the SZABIST buildings in their strive to save their planet!

12 thoughts on “Team Sustainability at SZABIST”