Tanhaiyan naye Silsilay – a TV show I started watching in past few weeks and I am glad to say that it is one of the best I have ever seen. With Marina Khan, Behroze Sabzwari, Durdana Butt, Badar Khalil, Asif Raza Mir and ofcourse Qazi Wajid this show promised a good time.

This show is a sequel to the hit Pakistani TV show of 1980s called “Tanhaiyan” that was aired on PTV. 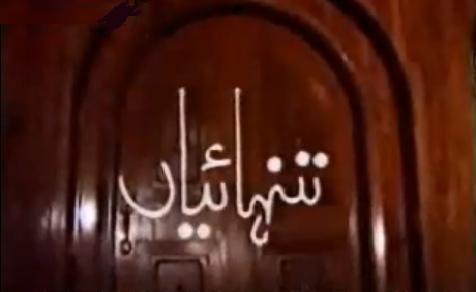 And the actors that I just mentioned were all a part of Tanhaiyan and a major part of the success of the show.

Tanhaiyan Naye Silsilay began from where it was left years ago but they have brought in a new generation and the actors playing these characters are not seasoned like their colleagues but have proven their acting skills in the recent past. These new actors include Shehroze Sabzwari (Behroze Sabzwari’s son), Syra Yousuf, Alishba Yousuf, Shahryar Munawar and Kaif Ghaznavi.

Unlike other shows these days, this one lets us relish Urdu language. We get to hear and see how it should really be used in conversation.

This show I must say is a treat for me when I come home on Saturday after university and watch the show online (as I am always in university at the time this show is aired which happens to 8 pm and yes on ARY Digital).

Last but not the least, the writer and the director of the show need to be applauded too. So like Tanhaiyan, Tanhaiyan Naye Silsilay is also written by Haseena Moin and the sequel is directed by Marina Khan herself!

All in all, this show is a must see.