This post is about the genre of Romance in general.

I did a Google search for Romance novels. The following picture is what came back. 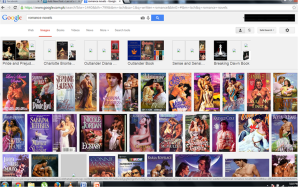 Book Covers: Are the writers finding it very difficult to sell their work that they have to portray half naked people as the face of their work? Or are they not confident about the story they have penned to have an identity of its own?

Lust rather than Love: Any time the feelings are to be described for the significant other, precedence is given to lust. Emotions hardly play a part as the reactions are mainly focused on body. Though heart is a part of the human body but that does not play that important a part (imagine that). You could find this line in almost every Romance, “He had to have her.” She is not a piece of meat!

Emotions: Authors do bring out emotions, only when they have to show jealousy. But even with that, sex has to be brought in with lines like, “Even the thought of her in someone else’s bed…”. There seems to be no reason beyond that left.

Sex: More than half the story is either how the significant other is having this person’s body react or the act itself. Love is more than satisfying a body!

After reading the above, you may wonder why I had to put this here. If I did not like something I did not have to read it. Nobody is forcing me.

I wrote this because I am writing a Romance myself and I:

And if I write anymore here, I may as well give away the plot.

16 thoughts on “The Genre of Romance”